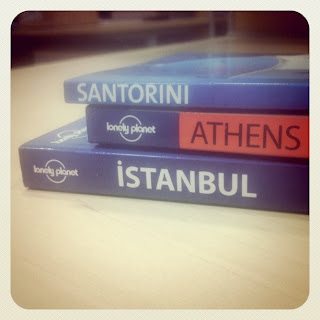 So a month or so ago I got back from a big family holiday, so it’s way past time that I post some kind of story about it…
I started off in Istanbul with Mr G, The Mothership and my aunt Diana (my mum’s sister), with a four night stay (Diana flew on ahead of us for an extra day) we then flew to Athens for three nights, before flying on to Santorini, where we met up with my Daddy Bear, my uncle James (Diana’s husband) and my cousin Jo (their daughter). We spent a week there and caught separate flights back to Athens where we jumped on the same flight home.
There were no logistical mishaps – which was a MASSIVE surprise to me, as I organised the majority of the trip and spent a lot of the time on edge worrying that I’d missed someone out on the flights or booked someone in with the wrong name. There were numerous suggestions for a toast to the organisation at various points, but being the superstitious wally that I am, I wouldn’t allow it until we were all safely home and I knew everything had worked out as planned, with no mishaps.  So I finally allowed myself to accept a “well done” from the group in baggage collection at Heathrow. And thus we encountered a problem with our meet and greet and got home much later than planned. The moral of the story? Never tempt The Fates, especially not when you’re so close to their front door.  They can hear you so much more clearly!
Anyway…  the first of three parts is below, with two more (Athens and Santorini) to follow!
Istanbul
Mr G, my mum and I flew in on a BA flight at the civilised hour of 11ish on the Saturday morning so we got there in time for a spot of unpacking, catching up on the Roof terrace of our hotel and planning where to head for dinner. Diana, having been there for a day already had sussed out the area so had some tips for us on places to eat and getting around.
We stayed at the Klas Hotel  in the old town, about a two minute walk to the Laleli tram stop. It was about a 20 minute gentle walk to the Grand Bazaar where there were lots of little shops, cafes and bars. From there we quite often jumped on a tram over to to the new town area where there is some more mainstream shopping (think Zara, Swarovski etc) and more cafes, bars and restaurants. For us, the hotel was well located, but for some it might have been just a little bit too far from all that “action”. If you’re happy to walk a little way or to jump on and off the tram, it’s perfect!
The hotel itself was clean, tidy and reasonably modern. It wasn’t high-design by any means, but the roof terrace with tables, sunbeds, cushioned lounging area (complete with fake grass for that Big Brother Garden feel), cute little pool and a bar was perfect for a little bit of chill out time after pounding the streets of the city. The staff were friendly and helpful, the breakfast was fine (so long as you stayed away from the orange concentrate) and there was free WiFi on each floor, which is always nice.
We spent some time at the main attractions on the first day, starting with The Blue Mosque which was pretty amazing, as were the other mosques (and they were plentiful), but the Hagia Sophia (Aya Sofya) was breathtaking, and with such an interesting history we spend a good hour or so just walking, looking, lingering and taking it all in.
The following day we spent some time exploring the little back streets of the new town by following a walk from the Lonely Planet guide. It started in Taksim Square through a modern shopping area, where we enjoyed an impromptu feast of mezzes, then on to some small backstreet areas full of cute bars, cafes and antique shops, ending up down at the Galata Tower.
﻿
﻿ 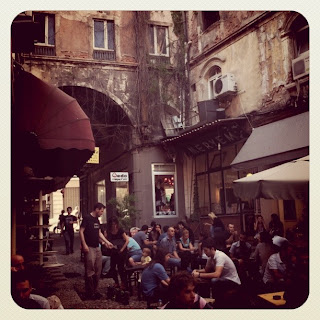 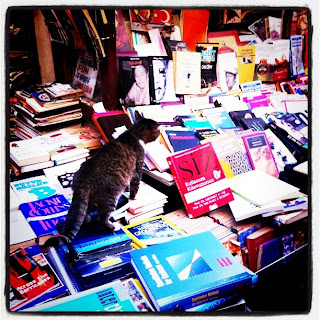 The next day we spent some time on the Bosphorus taking in the views of the city on both the European and Asian sides. The Bosphorus Bridge, which allows you to cross from Europe in to Asia, was pretty awesome. Sailing up and down on the river with a rather good audio guide and my little book made me realise quite how important this city was, and still is, in history. 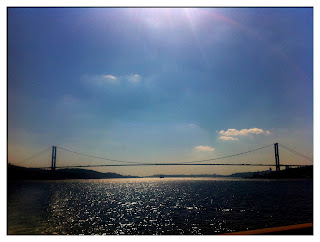 After all that culture and history and architecture I decided I needed to shop. So the next day we wandered down to the Grand Bazaar which, if I’m honest was a little bit disappointing. I was suspecting something like Khan el Khalili in Cairo, which was really like stepping back in time, or on to the set of Aladdin! In reality the Grand Bazaar was a little bit like a slightly old fashioned Lakeside.
We wandered and looked, but didn’t bother to purchase anything and so didn’t spend too long there. We pressed on to the Spice Bazaar, which was a bit more like it, but still a bit of a let down. My mum, Nick and Diana got a little tutorial in purchasing saffron, and I spent some time sampling the most amazing Turkish delight I’ve ever tasted: pomegranate with pistachio. Amazeballs! I intended to bring some samples home but it didn’t last the day, let alone the two weeks. 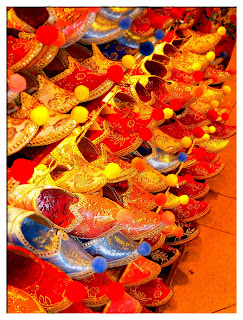 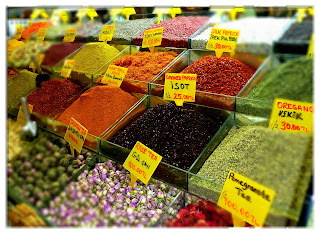 One thing the guidebooks really gloss over is the Basilica Cisterns. They really were a hidden treasure and I’m so glad we found them. They were the water vaults for the buildings above the ground, for storing water in case of siege (or so I read) and generally to service the city. The columns that hold up the ceilings are all mismatched as they were taken from various temples from across the empire and so each one tells a story… except the Medusa one – you don’t hang around to hear her story!
﻿﻿
﻿﻿ ﻿﻿ ﻿﻿

All in all I really, really liked Istanbul. I don’t think it makes it in to my list of ‘Top Five Fave Cities’, but to be fair I think we only briefly scratched the surface. One of highlights for me was the little tea lounge we found behind the Grand Bazaar where we got in amongst it with the locals, drinking tea, lassi and persuading them that I did in fact enjoy the Turkish coffee (we discovered that most locals don’t go near it). In fact we bumped in to a waiter from the previous night and managed to marry my cousin off.  When he asked for Facebook details we realised he probably wasn’t joking as much as we were, but he was about to jet off to New York to start an MA, so you know, he had some good prospects… and I’d never say no to a free trip to the Big Apple, Joanna… ? It was also good for Nick to have someone male to talk to for an hour or so, get some football chat in, talk about things other than shoes, the anti-age component of sunscreen and blisters from inappropriate walking footwear! 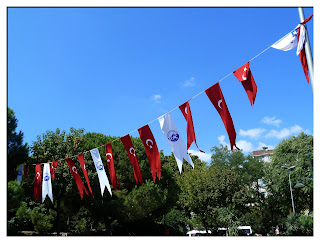 Two things will stay with me forever though. Number one - the views of the city. One of the most memorable views was from the bridge across from the old to the new town. Looking ahead to the old town, with all the fishermen lined up in front of you and the trams rushing by, you can see what looks like a line of seven massive mosques along the skyline. You don’t feel like the New Town is particularly “new” until you look at the old and realise that when “new” means 500-600 years old, “Old” means positively ancient!
﻿﻿Number two, and for me the embodiment of the city, was the sounds and smells. Sitting on a roof top bar wrapped in a blanket, with the wind off the river stirring our hair, amidst the sweet smell and smoke of the shisa pipes, sipping a cosmopolitan as the final call to prayer went out, it was very atmospheric indeed.


History and modernity all mashed up, pretty good for getting the goosebumps going, I’d say.
Musings by Victoria at 21:27